I always had known that giving up on my aim is not an option, but there was a time when I realized this one thing that shook me to the core of my being.

After two years of strenuous work and excruciating pain aiming for my goal to walk wearing prosthetic legs, I met victories that were followed by disappointment after disappointment. Still, I was relentlessly aiming for my dream. My last attempt to break through ended with disappointment that left me facing total hopelessness. I began questioning my goal. Maybe my dream was really impossible, just a wishful illusion? Yet, I didn’t want to agree with it.

And then, when it felt like I was in the bottom of hopelessness, suddenly an inspiration came to me to do something different. Try one more time. Do something that I haven’t tried yet. I haven’t told anybody this, but I followed the inspiration to try again, take a different approach.

And, when I did exactly what I was inspired to do – I got my answer! I knew the inspiration and the response was from the Lord. I knew He could lead me out of this hopelessness. That was the moment when my life began shifting into the direction I dreamed of.

If I had accepted that my dream was unrealistic, if I hadn’t tried one-more-time, I would have missed my opportunity to change my life! My destiny would have gone in a whole different direction.

Before you say ‘This is not going to happen, I guess it’s just impossible’, stop and ask yourself – what if my success is just one step away?

Would you have ever given up if you knew that your ultimate victory was just around the corner and all you needed to do is try one more time?

So, Try again. Your destiny might depend on it.

I want to share an excerpt from my book ‘Unstoppable. It’s a Choice’ where I share about the moment that made a huge impact in my life.

‘‘After filming and the program was shown, I saw how my story inspired many not to give up after their adversity, but to do whatever it took to persevere and move on. Most interesting was that I was inspired myself. After I watched the interview from the perspective of an observer, I learned an important lesson – never give up, because ultimate victory might be one step away.

I asked myself, “What would have happened if I had given up when my desire seemed impossible?” The answer was simple: I would have continued life imprisoned and deeply depressed, not knowing that I was only one action away from realizing my beautiful dream.

My experience strengthened me to continue despite the hardship and other people’s opinions. It reaffirmed to me that the path I was taking was not crazy as it seemed to others, but that of an unstoppable person whose strength of will relentlessly to keep moving her forward until victory was attained. Now I was ever more certain that I was taking the right path, and felt even more empowered to break through the obstacles in my way.”

So, I want to encourage you to be strong. Be determined and persistent. Be unstoppable.

Blessings to you and until the next time, 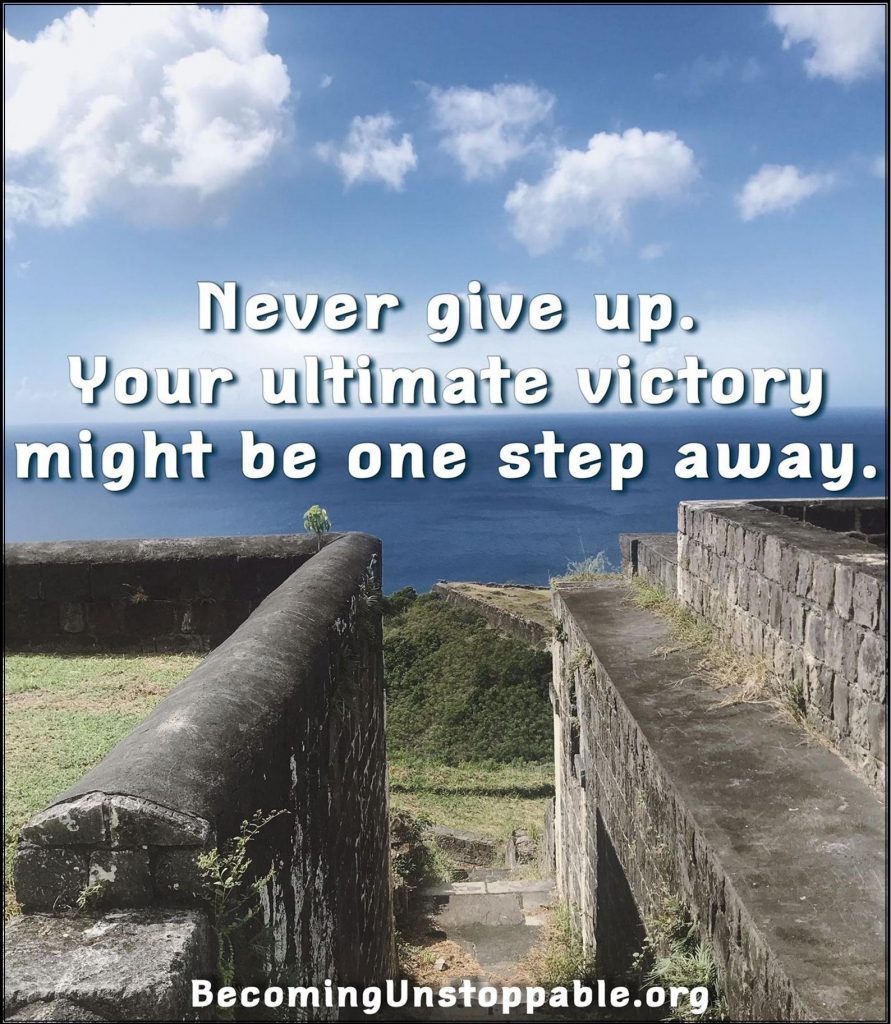 Inga Lizdenyte is a keynote Speaker on Inspiration, Empowerment, and Christian faith. CertifiedLife Coach, and Author of the book "UNSTOPPABLE. It's a Choice". Inga’s mission is to inspire others, share the message of hope and faith, and empower individuals to persevere, overcome, and achieve. After losing both of her legs and the use of her left arm in a tragic car accident at the age of 22, Inga was able to transform her life from not being able to speak, move or do anything independently, to traveling three years later by herself from her home country Lithuania, EU to California, USA and successfully building a dynamic and fulfilling life in spite of all odds. Many people claimed that the car accident destroyed her life, but Inga’s story shows that you can turn destruction into victory, and live a fulfilling life no matter what happens. By offering her speaking and coaching services, Inga now aims to make a difference in people’s lives. Inga brings the message of hope and faith by sharing her personal testimony of the living God’s power to restore the broken and turn the impossible into possible. Along with the message about faith, Inga equips individuals through practical advice and coaching to be strong in any circumstances, break through obstacles, and achieve their goals. Apart from her native Lithuanian language, she speaks and writes fluently in Russian and English. Inga has conducted a number of public speaking engagements and interviews in both Lithuania and in the United States for television programs, radio, and publications for inspirational purposes, and looks forward to continuing to share her message of hope. To book Inga to speak or for coaching sessions, please visit http://www.BecomingUnstoppable.org View all posts by Inga Lizdenyte